Learn about new breastfeeding communication strategies and research, and discover how to communicate more effectively for better results.

These breastfeeding communication strategies can help you learn how to write about breastfeeding, and related topics, with empathy and sensitivity.

The research provides valuable insight into the social, political and global perspectives that impact women and their infants’ health when deciding to breastfeed.

Understanding these perspectives will enable you to learn as well as write more comprehensive breastfeeding communication. 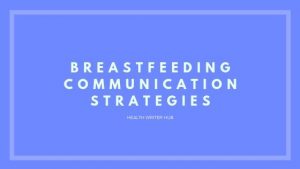 The researchers wanted to understand media messages “given that breastfeeding is influenced by many environmental factors and that perceived norms, social support, and perceptions of difficulties predict breastfeeding.”

The analysis was published in Health Communication.

Questions focused around the students perceived benefits and disadvantages of breastfeeding, they were also asked the type of advice they would give around extended breastfeeding.

Results, which were published in Health Communication showed the majority of responses were either negative or impartial to extended breastfeeding, even though many thought it would be beneficial to the infant.

3.  The impact of nurses’ communication skills on exclusive breastfeeding in first-time mothers

A randomised controlled trial of 170 nulliparous women were selected into one of two groups to investigate the effect of healthcare professional’s communication skills training on breastfeeding rates.

Results showed there were significantly higher rates of exclusive breastfeeding among the group of women who had received the intervention, compared with the control.

You can read the full article published in Clinical Investigation.

4.  What type of breastfeeding support do mothers receive on social media?

To better understand the type of support and information mother’s receive on a social media platform, a study which was published in the International Breastfeeding Journal analysed 778 wall posts on 15 Australian Breastfeeding Association’s (ABA’s) closed Facebook groups.

The analysis was carried over a four-week period.

From the analysis, researchers concluded women received both professional and peer support (in the form of emotional support and advice) from these closed Facebook groups.

Researchers interviewed eleven health workers who had provided infant feeding advice to mothers before and after the policy change.

Initial policy guidelines were that HIV positive mothers should exclusively formula feed to reduce direct HIV transmission to their baby.

In 2011 the World Health Organisation amended this policy to encourage exclusive breastfeeding, whilst at the same time ceased supplying free formula.

6. The meaning of “breastfeeding” is changing and so must our communication about it

In an article published in Breastfeeding Medicine, researchers explored the use of the term ‘breastfeeding’ and how its meaning has changed over time with the introduction of new technologies such as breast pumps, modern bottles, and the ability to freeze breast milk.

The authors argue the range of different behaviours that are associated with the term ‘breastfeeding’ hinder clear communication between health professionals and the public.

7. Breastfeeding promotion (BFP) strategies in countries of conflict – the importance of social media and other audio-visual aids

Breastfeeding promotion can significantly reduce infant death and malnourishment in countries of conflict, such as those in the Eastern Mediterranean region (EMR).

Researchers conducted a survey of 14 countries to assess the current situation as well as future opportunities for the promotion of breastfeeding programmes.

Results, which were published in the International Journal of Humanities and Social Studies assessed the types of current promotional messaging used, and found three main message types (protective, promotional and supportive).

Communication tools used to deliver promotional messaging were predominately in print format, compared with just half available in e-media and audio-visual format.

However, continued breastfeeding rates (CBR) for 12 months correlated highly with the use of social media.

This result gives support for future government and agency investment in social media platforms to deliver promotional messaging about breastfeeding.

8. The ‘Community Conversation’ – a community perspective on factors that contribute to breastfeeding duration

It is well-understood breastfeeding has substantial benefits for both mother and infant, yet there have not been significant increases in the length of breastfeeding to 6 months of age.

To better understand what factors contribute to breastfeeding duration, a ‘Community Conversation’ workshop was held by two local Australian councils.

The workshop comprised of 35 individuals, including; parents, grandparents as well as representatives from government and health services.

Results were published in the International Breastfeeding Journal.

9. The importance of targeting fathers in breastfeeding communication and promotion

Eight interventional studies comprising 1852 families were analysed in the BMC Public Health journal in an aim to analyse the effectiveness of focusing on fathers in breastfeeding promotion interventions conducted at either the antenatal period or within the postnatal period.

Results showed that at 6 months, exclusive breastfeeding rates were higher in the intervention groups compared with controls, suggesting a focus on fathers in breastfeeding promotion positively influences breastfeeding.

A study published in the journal of Health Communication aimed to better understand the attitudes and knowledge of 375 students towards women who breastfed in public.

Using randomised-group experiments the students were exposed to media clips of women breastfeeding in public.

Results showed that after students had viewed the clip, they were more supportive of women who breastfed in public as were less inclined to view it as something that is done in a private environment.

Libby Evans is a freelance health writer. She has Bachelor in Science from the University of Auckland, a PGDip in Human Nutrition and currently investigating the relationship of perception versus actual risk of disease development in her Master’s degree. Libby has held clinical, marketing and communications roles within a diverse range of industries including; FMCG, NGO and public and private healthcare. She is also the Digital Marketing Assistant at the Australasian Medical Writers Association. You can find her on LinkedIn and Facebook.

Libby is a member of the Health Writer Hub Alumni.