Learn how to write more effective content about cancer-related topics.

These cancer communication strategies can help you learn how to write about cancer, and related topics, with empathy and sensitivity.

It’s also important to remember that we need to be aware of the issues, context and consequences of using certain metaphors and language, such as war metaphors.

Read on to learn about emerging research into cancer communication.

1. ‘War on cancer’ metaphors may do harm, research shows

Bellicose metaphors in cancer communication can influence the health beliefs of nonpatients in ways that may make them less willing to enact healthy behaviours.

The “ubiquitous use of war metaphors when referring to cancer” may be harmful, according to research looking at into the impact of this type of language. 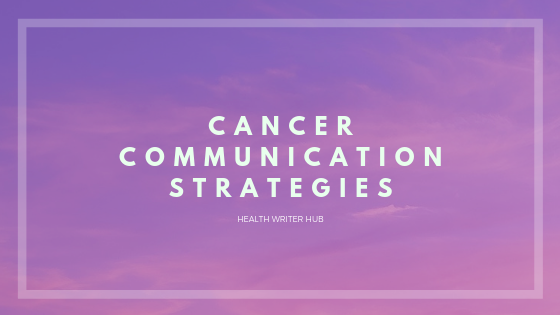 Over a 9-day period, during which actor Ben Stiller announced that he had been treated for prostate cancer, researchers collected 1.2 million Twitter messages about cancer.

Researchers investigated the differences in the use of language and metaphors among Spanish and Latina women who had breast cancer in a study published in the Journal of Health Communication.

Results from examining 51 breast cancer narratives revealed Latina women use the idea of spirituality in their use of metaphors to depict their experience with cancer.

And, while Spanish women used metaphors more frequently in their cancer communication compared to Latina women, themes of spirituality were not present in their narratives.

In an attempt to investigate the impact narratives had on colorectal cancer screening (CRCS) uptake, researchers tested a number of narratives on 477 unscreened adults aged between 50 – 75 years of age.

Participants completed online questionnaires before and after the intervention.

Results were mixed between the different groups and narratives; however, 30% of participants participated in colorectal cancer screening.

The study was published in the Journal of Health Communication.

5. Authentic family conversations about cancer have a positive impact

Effective cancer communication interventions are often guided by the theory that actors performing content should be ethnically and culturally homogeneous with target audiences.

This study, published in Health Communication, challenged this notion.

Researchers identified natural indicators of uncertain language and showed that these indicators can serve as a predictor of decisional conflict, in a study published in the Journal of Cancer Education.

The researchers suggest these natural indicators of uncertainty can “facilitate the monitoring of health consumer perceptions about cancer prevention recommendations and inform education and communication campaign planning and evaluation.”

The research, published in Health Communication, suggested that a patient’s emotional response to genetic disease risk may influence their information-seeking intentions.

An online educational tool helped to promote bone health knowledge in people with prostate cancer and breast cancer, according to researchers from the MD Anderson Cancer Centre.

9. Women and men feel differently about fruit, vegetables and cancer

Tailoring health messaging to target sex-specific barriers may improve their effectiveness. Researchers investigated the impact of fruit and vegetable intake on health-related self-efficacy, perceived indifference to cancer recommendations and beliefs around cancer-mortality, and whether these perceptions were influenced by sex.

Researchers suggest there is individual variability in the extent to which different factors predict fruit and vegetable consumption. “Interventions could also tailor message content to address health-related self-efficacy, perceived ambiguity, or fatalistic beliefs about cancer, depending on how important these factors are to the individual,” they wrote. The research was published in the Journal of Health Communication.

10. Cancer communication between partners is key for resilience when adjusting to a diagnosis

Researchers from Purdue University studied the communication processes that contribute to resilience in people with breast cancer and their partners.

The team interviewed 27 people with breast cancer to learn more about how they communicate with their partners.

According to the researchers: “Communication patterns and strategies utilised by survivors and partners are the key determinants of how some couples adjust to a cancer diagnosis.”

Recognising the tensions men with prostate issues face enables targeted support from family members and medical professionals – facilitating a quicker return to normality for the men.

Researchers followed 25 men who had undergone a prostate biopsy, investigating how communication tensions changed during a three year period, in a longitudinal study published in the Journal of Communication in Healthcare.

Semi-structured interviews and relational dialect theory (a type of interpersonal communication theory) at the initial stage of the study as well as at three years follow up showed the tensions were both contextual and time-specific.