Twitter is more than just short, written messages - you can use videos, pictures, and links to engage your audience. 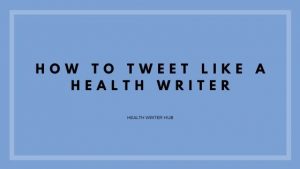 You may have seen doctors deep in conversation about surgical techniques on the hashtag #MedTwitter.

It’s also easy to find pharmacists on #TwitteRx talking about the math involved in antibiotic dosing, but the best tweets don’t use complex language.

If you’re using Twitter in your social media research strategy, you’ll notice that the way people read your online content is different on Twitter – you have a split second to get their attention and you need to do it without being misleading.

Twitter’s quick, to-the-point style can be difficult for health writers who are used to composing in-depth articles, and the jargon can get confusing.

As we’re in the midst of an infodemic, it’s important to share quality information on social media. Plenty of online tutorials can teach you the difference between retweets and hashtag chats, but let’s focus on health communication from credible Twitter accounts.

What can we do to get better #sleep and reduce our risk of #HeartDisease? Tune in live today at 12pm EST for a videocast featuring Dr. Michael Twery from @NIH_NHLBI’s National Center on Sleep Disorders Research. https://t.co/8t1RGoNkKy. #heartmonth #hearthealth pic.twitter.com/o5pHwGWCSa

The most successful tweets use plain language, even if the topic is complex.

This tweet about heart disease from the National Institutes of Health (NIH) has a Flesch-Kincaid reading level of grade 9.1.

That means it should be understandable to anyone with a 9th-grade education. It also includes an easy-to-watch animated video.

Hashtags, videos, and emojis do a great job of breaking up big ideas into smaller, easily-understandable parts.

After seeing this clear and memorable tweet, it will be hard for me to forget about the connection between sleep and heart health.

Clarity in health communication is an important goal for social media users.

In January, Twitter blogged about ways to assure that information about coronavirus was not misleading (this strategy was in addition to the existing country-specific guidelines about promotional healthcare information).

Twitter’s guidelines aren’t the only ones to keep in mind.

The US FDA Office of Prescription Drug Promotion published a guidance for social media in 2014.

This guidance proposes that if a drug’s benefit is mentioned in a tweet, the risks should be included too. But who has room for all that in 280 characters?

Social media drug advertising is a field of ongoing study for the FDA.

For example, influencers that promote medications they use are still in a legal gray area.

Public comments are being accepted this year for an updated FDA study about direct-to-consumer advertising by social media influencers, and I am interested in the outcome.

Personal Twitter accounts tend to be under less scrutiny than professional ones, but everyone should try to tweet responsibly.

If you look at credible Twitter accounts in the healthcare space, they are using effective engagement strategies that work around – if not exactly with – the guidelines.

The way to engage your audience with health content is the same as with any other content.

Be interesting, be relevant, and be quick.

#Raynaud‘s is a condition that affects about 5% of the U.S. population. It’s more common in women than in men. Learn more: https://t.co/Gtr0APYnrU via @TODAYshow

Sprout Social has ideas about how to find a popular hashtag if you get stuck, but a good rule of thumb is to search for the hashtag on Twitter and see how often it has been used in the past week.

Like any other medium, the language in tweets should be targeted to an intended audience while leaving room for a broader reach.

#CareForEachOther by staying current on vaccines for infections & illnesses, like seasonal flu. In addition to protecting yourself, getting vaccinated protects people who are more vulnerable to serious flu illness. More: https://t.co/iFuW4vMaHF #PrepYourHealth #MondayMotivation pic.twitter.com/uOYUzsws9P

I’m still not used to broad hashtags like #MondayMotivation in CDC tweets about vaccine efficacy, but that’s the way things are trending.

Carla Eisenstein is a medical writer, editor, and pharmacist based in Boston. She has been writing for social media in the healthcare space since 2012. Carla is dedicated to improving clarity of communication in clinical settings as a patient advocate. You can connect with her on Twitter and LinkedIn.

Carla is a member of the Health Writer Hub Alumni.