Fear-mongering in the media: does it work?

Fear mongering and scare tactics are used in public health campaigns to drive behavioural changes. We see fear in headlines for online articles, food label warnings, pamphlets and brochures. But how effective are these fear-based messages?

Fear mongering in the media is common, and public health campaigns use scare tactics to drive behavioural changes.

We see fear mongering in the media for online articles, food label warnings, pamphlets and brochures.

But how effective are these fear-based messages?

In fact, feelings of fear alone did not always correlate to quitting smoking.

Still, let’s not dismiss fear altogether. One technique that has shown promise in recent health communication research is combining fear-based messages with another type of emotional message. 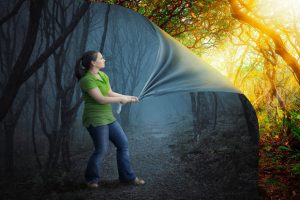 In this new study, US researchers found that, for fear to effectively change behaviours, it associates with the different emotional experience of hope. This concept is known as “fear-hope”.

The findings also build on the notion that positive hopeful emotions are helpful in preventative health.

The researchers used the concept of “fear-hope” to describe the emotional response that persuaded participants to adopt better sun safe habits.

When threatening information is followed by meaningful use of hope, this creates an emotional drive associated with a greater motivation to change habits.

Both data sets in the research demonstrated feelings of fear facilitated by feelings of hope.

This feeling of “fear-hope” was associated with sun safety intentions and behaviour, but not attitudes.

This included preventative notions to protect against skin cancer.

Hope is a source of motivation that orients people toward future goals.

Hope is associated with the desire that drives goal-directed action, especially in the face of adversity.

The US researchers suggest hope consists of five emotional states that influence:

By using these emotional responses of hope following the use of fear mongering in the media and health communication, the researchers suggest that, even with negative attitudes, a person can still feel motivated for the desired outcome – such as the onerous task of applying sunscreen.

Fear mongering in the media – responses

The researchers used unpublished data from two different studies to investigate responses to fear and hope from online health messages in the context of sun safety.

Both data sets were based on different samples of the population.

However, the datasets showed significant interactions of hope to predict intentions to change sun safety behaviours.

In the first data set, 341 users viewed a mock WebMD webpage featuring an interview with a chief of skin cancer research expert from the National Cancer Institute.

The information on the page was threatening, such as bolded subsections “How severe is skin cancer!” and “How susceptible are most of us to skin cancer?”

The participants aged 17 to 72 years used Likert scales were then asked to report their response to motivating sun protection statements.

Hope played a small but meaningful role in predicting the intentions to engage in sun safety behaviours – whereas fear alone did not.

Dataset two was based on the same topic of sun safety with a different message.

The participants were a majority female population of 382 undergraduate students aged 18 to 26.

Again, participants completed follow-up online questionnaires and Likert scales to indicate their personal relevance of skin cancer, and if they had engaged in a variety of sun safety behaviours following the lab session.

Descriptive analyses found participants experienced both moderate levels of fear and hope after viewing the video.

Why are these fear mongering findings important for health writers?

The researchers’ suggestion that hope emerges as a relevant variable with fear mongering is unsurprising.

The findings in the data studied supports how positive and negative emotional responses can work harmoniously to persuade our audience.

Fear can still play a role in our writing, and the researchers still encourage using fear mongering in the media and health communication.

But they suggest if you do, to encourage your audience to feel that engaging in the recommended behaviour will lead to the desired outcome.

Hope can be used to help our readers feel.

Hope is evoked in response to information that relays to a person’s confidence in performing a desired behaviour.

The value of hope for its persuasive effects on fear messages in preventative health is enough for us to integrate carefully in our writing.