Health communication strategies for smoking prevention can help you write more effective messages about quitting smoking or cutting back.

Most health writers will write about smoking prevention at some point.

In this blog, we’ve collated research exploring health promotion and public health strategies to reduce smoking in the community.

Read on to learn about the latest scientific evidence behind smoking prevention. 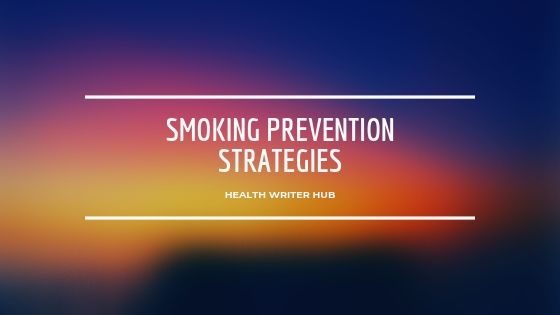 Those in the between-subject experiment were exposed to either a GHW or a text-only cigarette packet.

Results showed the GHW cigarette packet was more effective in stimulating the desire to quit.

People also believed the GHW packet had more useful information and their attention to the smoking prevention messaging was increased.

However, these effects were only seen in people who were experiencing low levels of stress.

The research appears in Health Communication.

2. Affective engagement with quitting is critical to transforming knowledge into behaviour

The eight items were all positively correlated.

The authors concluded: “In summary, this study has shown that there are fairly consistent positive correlations between the perceived importance of different sources of advice about quitting smoking, that advice from a range of sources can have positive impacts on quitting intentions and behavior, that affective engagement with quitting seems critical to transforming knowledge into behavior, but also that there is a significant minority of smokers (about a third of this sample) who are not at all engaged with any information sources about quitting.”

Researchers looked at smokers’ reactions to graphic smoking prevention ads displayed at the point of sale to work out how effective these ads are.

Antismoking ads fared best when viewed alone, and graphic ads were least influenced by the context in which they were viewed.

“These results suggest that in developing POS campaigns, it is important to consider the competitive pro-tobacco context in which antismoking ads will be viewed,” the researchers wrote.

Researchers developed and validated a brief Reactance to Health Warnings Scale which, they argue, can serve as an efficient adjunct to the development of persuasive messages.

“Our brief scale is an efficient and psychometrically strong measure of reactance to health messages,” the team wrote in the Journal of Behavioural Medicine.

5. Health warnings on cigarette sticks may serve as an effective means in reducing tobacco use

The researchers sent out an online survey to 479 first-year Australian University students.

Participants were asked to rate the effectiveness of the warnings, compared with warnings placed on individual cigarettes, which were divided into four main themes.

The research appears in the Journal of Health Communication

Following our blog on how to help people quit smoking, a controlled study of college smokers also found a significant interaction effect between gain-framed messages on smoking-risk perceptions.

The study investigators also found the interaction between message framing and non-narrative contexts had an indirect positive effect on attitudes to quitting smoking.

The research appears in the journal Health Communication.

7. Culture-specific messaging is best for smoking prevention strategies in pregnancy

Culturally-specific messaging in social media campaigns that target the whole community is an effective smoking prevention strategy for reducing tobacco use in pregnancy among rural Alaskan native women.

The researchers found the women preferred factual, loss-framed messages that included visual concepts on how maternal tobacco use is harmful.

This preliminary research is in the Journal of Communication in Healthcare.

9. Creating the generation that ends smoking

Premiering truth ads (truth is a US anti-smoking campaign) during a popular, culturally relevant televised event was associated with higher awareness of these ads and increased social engagement related to the tobacco prevention mass media.

10. Smoking and cancer more believable than smoking and disease

The findings suggest there are ‘important differences’ in the ‘believability’ of tobacco-related information. The research appears in Preventive Medicine.

Could non-smoking friends of smokers help them to quit? This study looked at what non-smokers thought of anti-smoking messages delivered in both narrative and non-narrative format.

The results suggested the non-smokers perceived fewer health risks of their close friends than an average college student. You can find the research in Health Communication.

In this study, people watched a short video about the link between genetics and smoking/lung cancer before expressing their reactions to the relationship between genes and addiction.

The results suggested the preconceived notions of what a genetic risk is influenced the viewers’ beliefs and led to either acceptance or scepticism, wrote researchers in the journal Social Science & Medicine.

In an editorial, researchers from Stanford discussed a cigarette brand that uses health-oriented marketing terms such as ‘natural’ and ‘addictive-free natural tobacco’ and ‘made with organic tobacco’ which create inaccurate notions about their products.

The editorial appears in the American Journal of Public Health.