The health writers of the past were tasked with promoting very different medical treatments and had a smaller range of mediums to utilise.

From advertisements depicting doctors promoting cigarettes to poems about tobacco enemas, historical medical marketing is full of surprises. It’s safe to say that we are in a better place today.

As health writers, we encourage patients to adhere to their treatments, look after themselves and stay healthy. Whether we’re writing health articles, blogs, news, patient education materials, research papers, materials for doctors or copy to sell products, we create content in order to help educate the public about their health and improve global health outcomes.

Of course, the health writers of the past had the same grand vision – though, they were tasked with promoting very different medical treatments and had a smaller range of mediums to utilise.

In fact, the messages that were used to market historical medical treatments – along with the treatments themselves – are as fascinating as they are shocking.

Whether or not there’s an inspiration to be drawn from these ads and anecdotes remains to be seen – but, one thing’s for sure: Next time you’re struggling with a writing project, be thankful you haven’t been tasked with promoting crocodile-poo contraceptives.

Marketing tobacco with an enema rhyme

Ever wondered where the saying ‘to blow smoke up one’s ass’ comes from? This expression, which means that someone is giving you an insincere compliment, was once a literal procedure.

Tobacco enemas were used to treat colds, drowsiness and stomach pain – among other ailments.

This treatment is perhaps most famously remembered by a short yet powerful rhyme, penned in 1774, by one Dr Houlston:

Tobacco glister, breath and bleed.
Keep warm and rub till you succeed.
And spare no pains for what you do;
May one day be repaid to you.

The ad for Mrs Winslow’s Soothing Syrup was supported by an energetic call-to-action along with, shall we say, a creative license to capitalise. The problem? Old lady’s syrup contained morphine.

Touted as a ‘perfectly harmless’ treatment that ‘produces natural quiet sleep’ (seems those medical writers of the past loved their health buzzwords, too), this product apparently had a host of benefits and was dubbed ‘the mother’s friend.’

ADVICE TO MOTHERS!—Are you broken in your rest by a sick child suffering with the pain of cutting teeth? Go at once to a chemist and get a bottle of MRS. WINSLOW’S SOOTHING SYRUP. It will relieve the poor sufferer immediately. It is perfectly harmless and pleasant to taste, it produces natural quiet sleep, by relieving the child from pain, and the little cherub awakes “as bright as a button.” It soothes the child, it softens the gums, allays all pain, relieves wind, regulates the bowels, and is the best known remedy for dysentery and diarrhoea, whether arising from teething or other causes. Mrs. Winslow’s Soothing Syrup is sold by Medicine dealers everywhere at 1s. 1½d. per bottle. Manufactured in New York and at 498, Oxford-street, London. 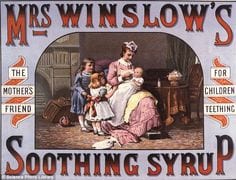 In ye olde medicine land, cocaine was the number one remedy for everything from your child’s toothache to alcoholism. Tell them to drink more, then hand them our tawny port! 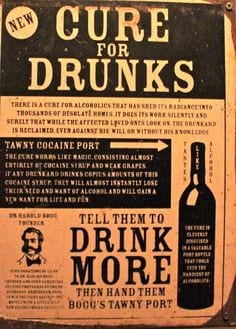 Years ago, if you were female and a little unwell, medical professionals like Dr Swift here used to treat you by administering, well, you get the picture (and that’s a historical marketing message that can stay in history). 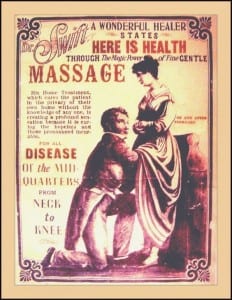 We all laugh about how doctors and teachers used to smoke in front of our grandparents, but one doctor took it further. Dr Batty (he certainly was) invented some clever cigarettes which provided temporary relief from asthma as well as ‘all diseases of the throat’. History’s medical marketers came up with the clever tag line For Your Health. 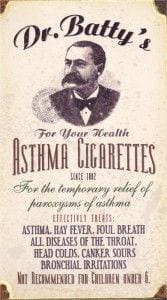 It’s exactly what you think it is. Ancient Egyptian women used crocodile poo as a form of contraception.

In ancient Egyptian medicine, animal dung was thought to have incredible healing properties and was used to treat many health concerns. Those clever Egyptians didn’t stop there, though – they’re also renowned for treating toothaches with a dead mouse paste.

The Kahun Papyrus, which is said to detail this treatment, dates from 1850 B.C. and is the oldest surviving medical text in the world – as well as the closest item we have to an ‘ancient’ historical medical marketing message. 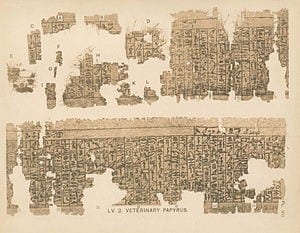 History’s health jolting chair, for all your medical ailments

This comfortable-looking health jolting chair was touted as the ‘most important health mechanism ever produced’. In somewhat of a journey into the typography of history, medical marketers appear to have used at least 12 different fonts and size combinations. 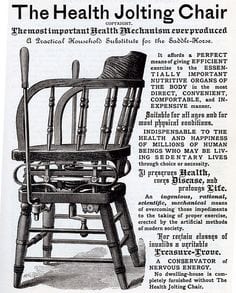 And, that’s not all, folks. Blended corpse formulas, skull-licking, mercury antiseptics, animal bile treatments and goat testicle implantation were just some of the many medical procedures and ‘cures’ that society accepted as the norm at some point throughout medical marketing history.

I wonder: Will the medical writers of the future also look back at our work – and our modern-day treatments – with the same feelings of disbelief, bewilderment and trepidation? Time will tell.

What’s the most bizarre treatment you’ve written about? Does it top this list of historical medical marketing messages?