Browse some of the latest public health research about anti-drinking messages and alcohol communication.

Browse the latest research into alcohol communication and anti-drinking messages. 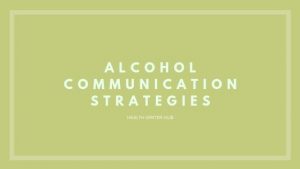 1. Alcohol communication through self-affirmation and storytelling can reduce consumption

Women who were encouraged to reflect on their most important personal values and beliefs before listening to a story about alcohol disease were more likely to drink less alcohol afterwards when compared with women who did not self-reflect.

This research, published in the Annals of Behavioural Medicine, indicates the potential of storytelling coupled with self-reflection for changing health behaviours.

Participants primarily viewed faces of people, as well as alcohol use cues and cryptic one-liners, in a study looking at eye movement patterns in response to anti-binge drinking messages.

The participants spent less time and energy viewing the text components of the messages.

The study was published in the journal Health Communication.

3. How women communicate about alcohol and drinking

In an open access, qualitative study published by the journal Health Education Research, 89 blogs were analysed from a non-commercial website called ‘Drinking Diaries'(drinkingdiaries.com) in an attempt to answer the research question: What are the narratives about women and drinking on online blogs?

Such insights into the different narratives women use in relation to their drinking can provide information for specific future intervention programmes and campaigns regarding women’s drinking.

Students exposed to ‘loss’ messages (as opposed to ‘gain’ messages) were the most likely to avoid binge drinking, but that finding was mainly among non-binge drinkers.

The research was published in Health Communication.

5. Humour in alcohol communication had an impact on conversations about drinking

An open-access article published in the journal of Health Communication investigated the use of humour in ads advertising alcohol.

People were shown beer adverts that were positive and humorous. Participants were then asked a series of questions about the ads.

The ad which used humour had the most significant impact on participants’ conversation about the ad and discussions about alcohol.

For parents, disclosing alcohol habits with kids may improve trust and understanding within a relationship – yet it may also normalise or glamorise underage drinking.

The same students were followed up again after seven months. The results suggested that disclosure is associated with students drinking more alcohol and experiencing greater consequences.

They were asked a series of questions to see if maternal disclosure had an impact on drinking outcomes.

Results were published in the Psychology of Addictive Behaviours.

Social media posts that depict alcohol-related behaviours, such as those seen on Facebook and Instagram platforms, are a common practice among young people.

Results of the content analysis showed alcohol-related posts were portrayed in a positive social context and received more likes than non-social posts.

Further results and a summary of the research was discussed in an open-access article published by the Journal of Medical Internet Research.

In this open-access study, researchers found that people who viewed alcohol portrayals in TV programmes or movies did not increase their consumption of alcohol.

But those who viewed ads depicting alcohol had a small increase in alcohol consumption compared to those participants who did not see the ads.

The research was published in BMC Public Health journal.

9. New drinking advice for pregnant women in the UK

Pregnant women in the UK are now officially advised to consume no alcohol at all, according to The Conversation.

“These guidelines, from the Chief Medical Officer (CMO), were issued in January 2016, and replaced a previous recommendation that women should limit themselves to one or two units of alcohol, once or twice per week, and not get drunk,” the author wrote.

Parent-targeted interventions in primary care increased the frequency of parent and adolescent communication about sex and alcohol, according to new research published in JAMA Network Open.

“Results suggest that there are innovative strategic opportunities for clinicians in primary care settings to join with parents to effectively achieve better health outcomes among sizable portions of adolescent patients,” study authors wrote.